This, my first “whole” 3D creature built from the ground up, was fun, frustrating, and flawed, all in turns.

A base of paper mache and clay, along with skills learned through the internet and previous projects were a good start, but then I went all crazy and added feathers.

Note: working with this many feathers is not an ideal task for the impatient or easily-annoyed artist! To make it a bit easier (in a way), I took the assortment of loose rainbow-colored feathers and first glued them (‘stem end’) into double wide binding tape. I should have taken a picture for you…it was all rather ridiculous. Think cartoon character + glue + feathers. That was me...

The legs and its head colors were created by applying acrylic leftover paint skin scraps I had made over the years, and its eyes are glass with sparkly fingernail polish layers painted on the back so the color shines through all pretty (and yes, all paint and acrylic skins were applied before the feathers!).

The legs are rebar under the color, as I knew they’d be too long and spindly for support if I tried using anything else. (Note: The Home Depot, Lowe’s, and ye olde local hardware store are a sculpture artist’s best friend)

Flow is standing in front of an acrylic painting of feathers I made concurrently with the critter…which is, I find, a great way to feel like I’m still working on the same project but have to wait for drying time at different points in the sculpture-making process! However, it was not my intention to do related subjects like this in tandem, but it worked out well...the painting guided the craziness of the colors on Flow and provides a nice backdrop behind it. 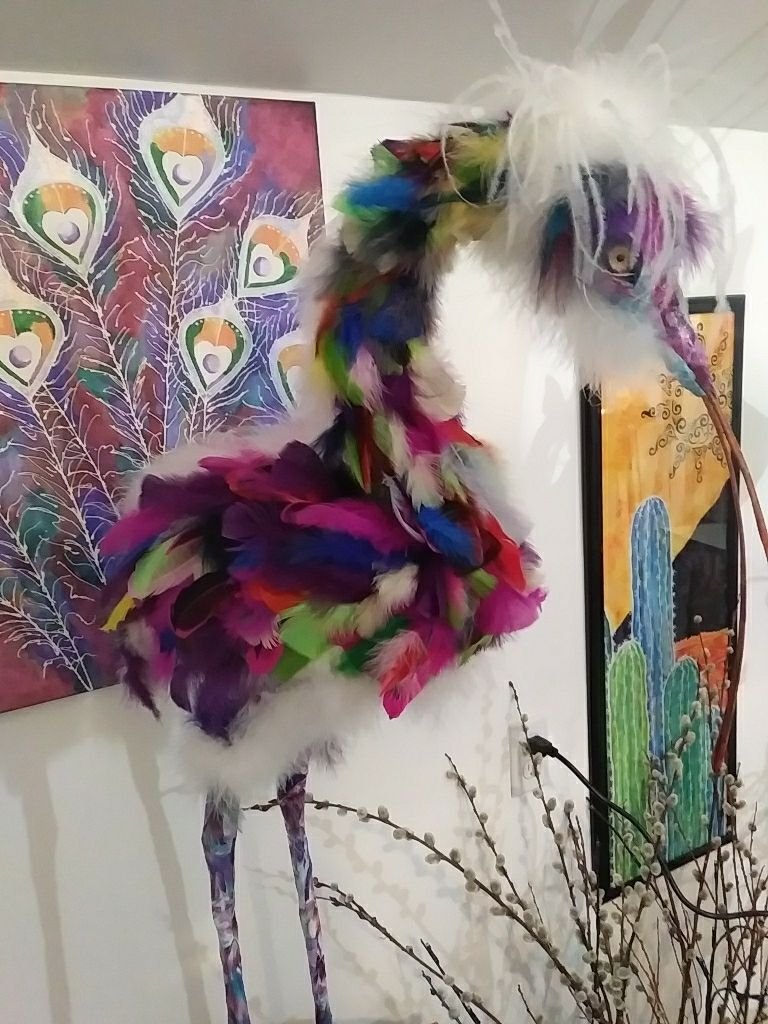 Flow was named such because, especially as it approached final stages, I could never decide if the bird was male or female. I had been thinking it was female as I was building it...but a female doesn’t have such glorious “peacock style” tail feathers. So I figured this is, perhaps, a gender-fluid bird. Hence the name “Flow” (fluid). When it is with the painting...male. When it is not with the painting...female. Or neither at any time!

So now, I covered some of the “fun” and the “frustrating” part of this piece. What of the “flawed”?

I do not as a general rule point out specific quote unquote “flaws” in pieces I make. Sometimes the “flaws” are indeed mistakes, but may not be noticed by others, so why point them out. Other times the “flaws” may have been unintended results from my process...yet ended up looking interesting, although definitely different than what I had intended.

Then there are “flaws” because my skills just weren’t up to where they should have been yet for the particular piece. That is indeed the case here. I do like being able to look back, however, and see those kinds of “flaws”. It is a reminder of how far I have come.

Flaw #1: Flow has no feet! I was totally stumped on that one. I had NO idea how to do feet and still have it be stable and upright! My solution...make it (only kinda sorta) look like it is standing in a pool of water, and therefore you “can’t see” the feet. Definitely a newbie sculpture artist issue here. I know how to do feet now. In fact, I could even add feet to the poor footless bird anytime now if I wanted to. But, oh, there are so many OTHER things to work on. Plus, then it would look like it is standing on top of the water - which wouldn’t be right either.

Flaw #2: I am not happy with where the long bill attaches to its head. I was going for the ibis kind of thing, which I did accomplish with that bill, but the structure between bill and head I really was at a loss on. Again - much learned since then. It would not look like that if I were to build it now. Although - if I were to build it now, I very well might skip the glue & feathering fiasco...and that would be a shame, as it just makes the whole bird look freaking fun. And muppety

I’m not sure I’ll end up with another muppet in the studio, but who knows, we’ll see. 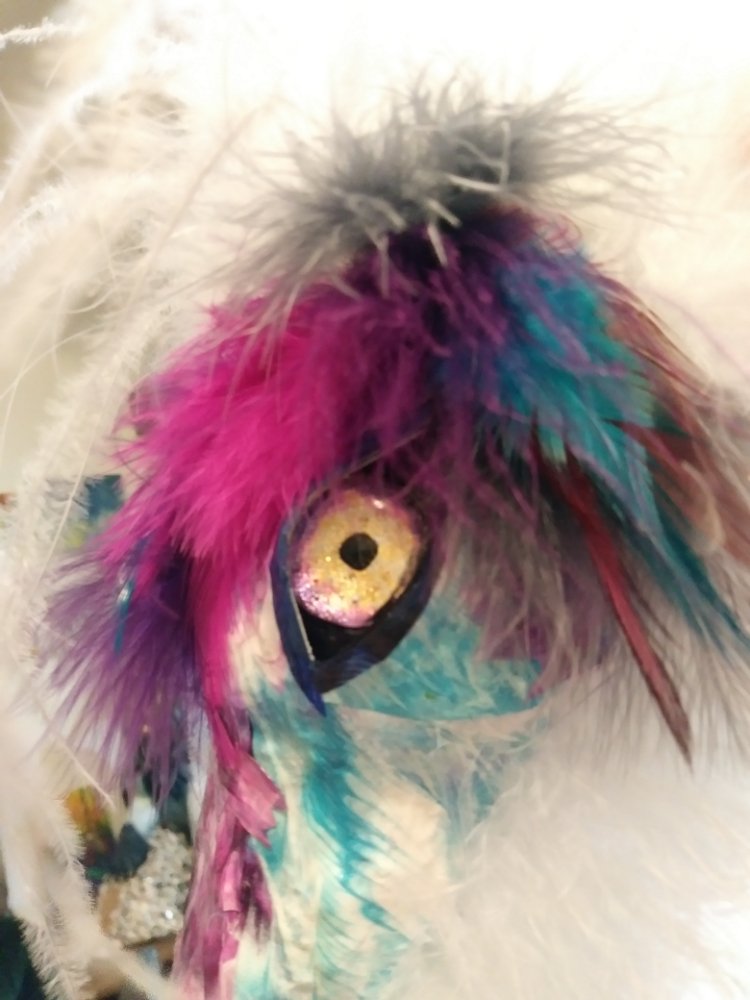