Hello, fellow traveler, and welcome to “The Traveler”.
Come and journey with us, will you? Grab a cup of coffee first - this will take awhile.

On my 52nd birthday (10/10/18), for whatever the reason, it became clear to me what the male mannequin, which had been standing without purpose in my studio since early that spring, needed to become. He needed to become “The Traveler”...my representation of the journey through time each of us gets to experience such a very small portion of.

Although my thoughts about how to have him represent that was not fully formed, the idea of focusing on time, timepieces, connections, journeys, and words was all there, relatively instantly.

I debated a little while (minutes? hours?) then whipped up an email and sent it out to family and friends who have shared part of my little journey through time and space, that I might gather from them timepieces (and some related objects) to incorporate into the work. I was not sure yet what I would do with what was given to me, but I was sure I’d figure it out. First, I needed the objects, so I could consider. I gave everyone a deadline...October 31st. And for the most part, all contributions came in by then.

And then what happened? Well, the passage of TIME. I laid everything out which had been given, took pictures of each piece and made note of who it came from, and simply let them sit quietly on a couple tables as I waited for The Traveler himself to tell me what to do. In the meantime, as I went out and about my daily routine, I kept my eyes open for more appropriate pieces, and over TIME gathered up (at secondhand stores, mostly) more watches, a metronome, a sundial, a walking stick, a travel guitar (as what is the point of traveling through life without music?), and various other little bits and pieces, including His funky glasses.

I decided I definitely wanted things (words of wisdom) written all over him. How this would come about, I had no idea. But first I started making note of those words which spoke to me. In the meantime, I started adding texture and color to him. I decided on black...I do not know why...but that turned out to be a very excellent choice, as you’ll learn later.

“Research” into words to include meant making note of particular lyrics from songs which really captured the feeling I was going for. It also included many hours of poking around online for words of wisdom by other “wise folks”...on the topics of time, living, journeying, etc. All in all, I ended up with TONS of things I could use when the placement and mood was right.

Now fully textured and painted black, I set about figuring out how to write on him. I am NOT skilled at hand lettering! So I decided on simple block letters, and made myself a guideline to use so letters would be the right height and so that I could draw guidelines (in pencil) on his body before I started writing.

So, here was the process: 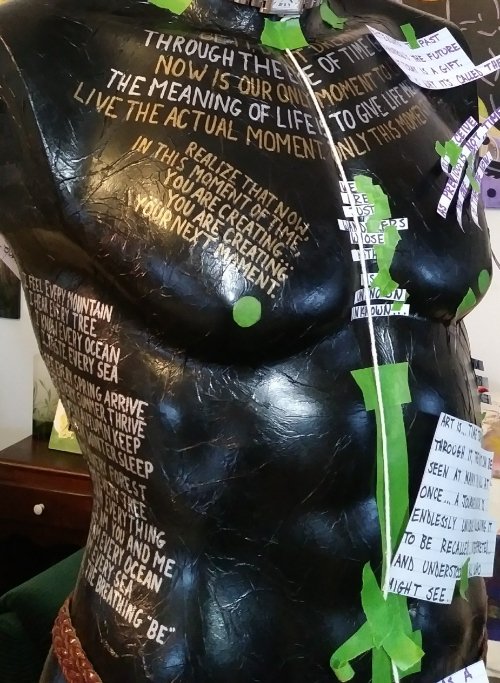 On the one hand, this was all SUPER exacting and requiring a lot of physical & mental attention. But on the other hand, the words I was writing, and the attendant mood music I was playing as I worked, took my heart & soul to a different level. And with that particular aspect, I found myself often in tears of realization/personal growth and a feeling of connection with the cosmos and life in general.

The very first lines I put on him were the most challenging technically. Wrapped around his head above his eyes, a beautiful bit of song lyrics from Phideaux: 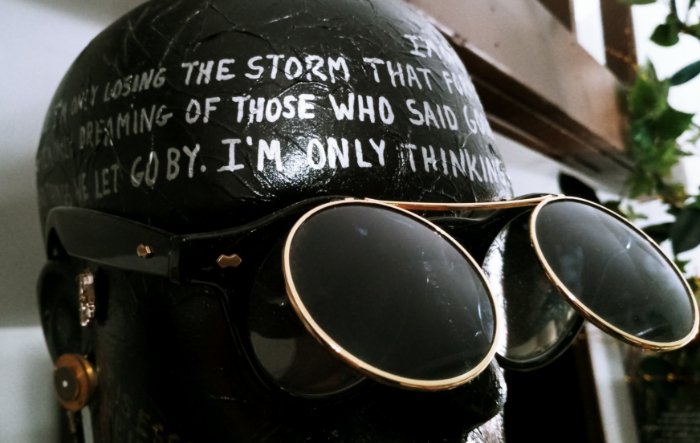 The next lines, also from Phideaux, and oddly enough from the same 12-minute epic song, were placed up and down each leg, on his chest, and on his back. So, between head and body I had a “framework” of sorts to guide placement of other words. Additionally - I was hooked; this would be a very special work indeed:

Eventually, all words written upon him, I got to place all the timepieces...although some of them I placed midstream or at least knew where they’d go. Especially for “special” pieces, such as the grandfather’s clock in the middle of his chest, or the central watch on his collar. (Here I’d like to thank the inventors of Apoxie Sculpt for creating such an excellent product for me to work with to adhere these unusual, and sometimes quite heavy, items!)

Running into a snag as I approached the finish line...oh my, I didn’t give much thought to his base! As in - how can I fix the current base so that he is easier to lift and move? The Traveler will (and has!) traveled after all! But after much consideration and some trial and error, I decided this was just a lesson learned...think about the base BEFORE you get too far along into a project! As it is - flat-based as he is - it requires care and some steady pairs of hands to move him. But, unlike you and I who journey through our days constantly, he does not (fortunately) do all that much actual traveling.

Finished, I put the music setlist together (see bottom of post) and set about in between other projects on filling in his journal. Eventually, I thought he was officially done.

There was one more line I had to add. But where to put it? He was balanced, he looked totally complete. Then, it came to me. And it’s the one line that no one is likely to see, so I’ll tell you…

On the very top of his head:

“A life is love that is given”
Lyric courtesy Rick Miller 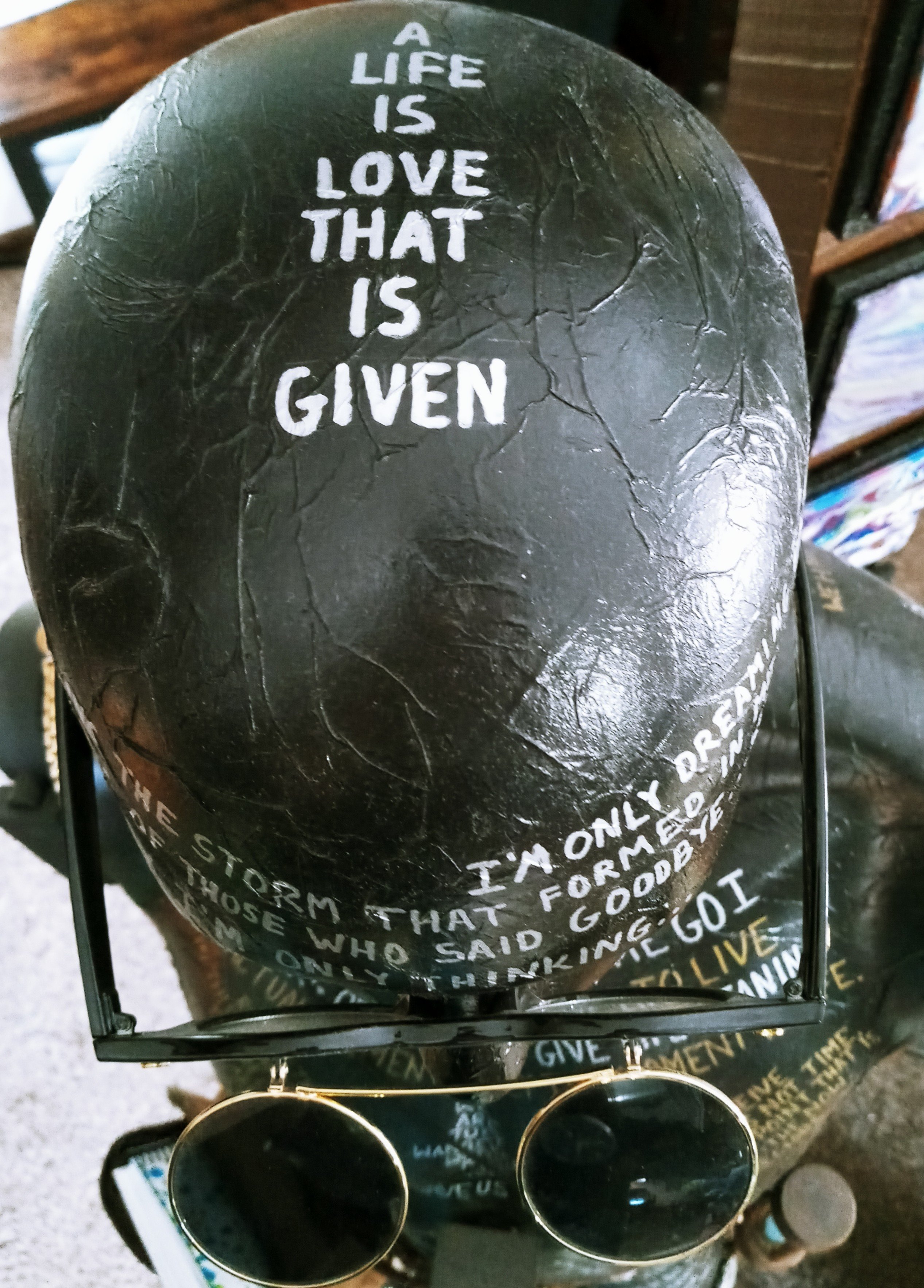 As for other words of wisdom written on him? Well...there are many. You’ll have to visit us sometime….

The Traveler was a truly powerful piece for me to create. I experienced a lot of personal growth, as well as growth as an artist. This happens with most pieces, as I keep pushing boundaries and exploring new territories and challenges with materials. I ended up making a setlist of most, but not all of the songs which have lyrics represented on him, and when I play the setlist now, I can oftentimes find my soul reaching to where it was during the creation process.

On “The Traveler” himself, you’ll see:

-Timepieces and the other treasures contributed by some of those who have shared a part of their journey in this same little corner of time and space with me.

-Words of Wisdom: Those written in silver upon his body are either direct quotes from personal connections with others or select lyrics to songs I found particularly compelling in the creation of this piece. Those written in gold are quotes by other people, most of them “famous” for a particular reason, although all of them, in reality, are simply fellow travelers also sharing a bit of their journey with me.

Within the journal he carries you’ll find pictures of the contributions (and who shared them), as well as attributions of all the words he wears.

We are all travelers, making our way through our own infinitesimally small portion of time and space, sharing with others along the way moments of sadness, sharing, bliss, and growth.

We can look to the past and think of the future. We can share part of our journey in the company of others as we travel along our own personal path. We must enjoy and be mindful of the ever-present now, as this is the only place we ever truly are.

-Melissa, in whose consignment shop I found the traveler. I really didn’t want him - I’ve not done mannequins with heads...only headless ones (don’t ask…). But after a few visits she finally convinced me to take him home. Which is where he stood, actually, for the better part of a year before I started working with him!

-And you, for sharing part of your own special journey, and some of your “now” with me.

Musical Setlist:
(Play on YouTube)
(yes...it is a long setlist!)